Whats left in the fridge. 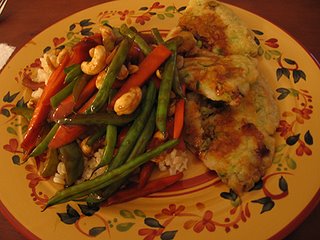 Tonight was one of those use up what is left in the fridge night. I usually end up making one of two things: Vegetable Kofta's in Curry Coconut Sauce or Stirfry Veg. Tonight it was the Stirfry Veg. Just because. I used up my carrots, red onion, green bell pepper (i don't even know why I had a green pepper, i almost never use them) and string beans. I sauteed them up with some raw cashews and then added a tamari-arrowroot sauce at the end so that it got all thick and saucy and delicious. While I was cooking the veggies I discovered some scallions in the fridge and decided to make a giant scallion pancake as a surprise for Peter. When I called him into the kitchen and showed him the surprise he had no idea what it was..he guessed and egg! I gave him an "are you serious?' look. Then he guessed tofu. When I revealed that it was a scallion pancake I received a hug. So sweet. The stir-fry was delicious as usual. The pancakes need some work. They were a little doughy this time for some reason but still good to eat. I hope tomorrow I have a chance after work to go to the union square farmers market or else we will have to eat the rest of my brownies for dinner.

Those are my old standbys too :)

yo jenna. i love this blog of yours not only for the beautiful pictures of delicious food, not only for the great bits of your personality ("i don't even know why i had a green pepper;" your mysterious relationship with spices; your struggle to document your recipes; etc.), but mostly for the behind-the-scenes look into your loving relationship with peter, which always brings a smile to my face. so sweet, indeed.

The stir-fry looks great with the cashews. And a scallion pancake?! Very creative! Hugs are totally deserved for that! Lol!

That is a beautiful beautiful meal !
And the plate itself, gosh, it's totally me !
I want plates like that !

urban vegan: they are two very good standby's..i'm trying to creat new standbys but alway's go back to the same two out of convienence.

stephen..you alway's say such wonderful things. and you are a wonderful person. me you peter and kelli should go out to eat one night soon in nyc.

candi~scallion pancakes do deserve a hug! :) Cashews are my absolute favorite..i put them in stirfry's, chili, burrito's whatever i can put them in they go in.

gaia, thanks! it was a beautiful meal and made me feel good and happy. i got the plates at Target. I love them although they are chipping and breaking but I think that has something to do with me and not the plates. my coordination is alittle off sometimes. :)