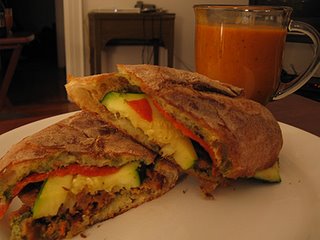 We are going to my parents for the weekend so all we had time for was a quick dinner (and a quick post). I made panini's! They are spread with the rest of my pesto and have homemade seitan with zucchini and roasted red peppers. I grilled and pressed them as flat as I could with my panini machine. I served them with a mug of the soup I made the other night. It ended up being to much food for me. It was damn tasty though. 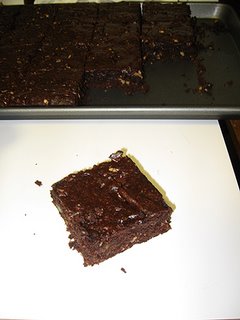 This afternoon I made brownies. These are Chocolate Walnut Coconut Brownies that I use to make in a restaurant that I worked for. I havn't made them in over a year and half. I don't know what was wrong with me because these are delicious. As you can see the recipe makes about 24 very large brownies. 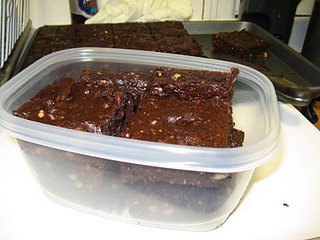 I packed up a few to take to the parents. Froze some. Saved the rest for later.

Have a great weekend!

hey - i LOVE your blog! thanks for posting your comment on mine so I was able to find you.
can't wait for baking weeks - starting in november.
maybe we can meet for coffee or something somewhere around union square some time?

Hi Jenna!! Thanks for your comment on my blog! I was so intrigued by your "About Me" paragraph! What a great move! It's move I dream of a lot! I'm not great in the kitchen, but I love food enough to want to learn. :)

Your paninis look great! Seitan is a favorite of mine, so it really looks awesome!

WOW - those brownies! Choc-walnut-coconut! YUM! They look huge. My daughter would LOVE them!!

Thanks so much for stopping by my blog. I will be back here often to see your creations! :)