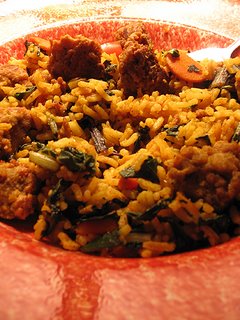 I went to the Union Square Farmers Market today after work with plans on buying a bunch of vegetables to use through out the week for the dinners I had planned to make. Instead I used most of the vegetables to make this. Originally I was going to make potato pancakes with tofu sour cream but realized on my way home from the market that I had seitan to use up. Somewhere between the market and the subway biryani found its way into my head. Today was also peters first day at a new job and I wanted to make him something nice for dinner Biryani ended up being just the thing (it is one of his favorite dishes to eat when we go out to Indian except he has his with lamb). Tonight he was stuck with Seitan. Which got me asking him all about lamb and what spices I could use to make the seitan biryani to taste like the lamb biryani he loves so much. He gave me very good spice ideas to add to the seitan, which I hopefully will be able to try out next week just to have some different styles of seitan. I'm not really into all the mock meat that's out there or recipes for it that I have seen. I don't even like mock chicken stock or anything like that. But I like the idea of different spices to add different flavors and such to seitan, tofu and tempeh without it turning into mock whatever. Anyway, this turned out really good for me not really knowing what I was doing. (I'm not a Biryani maker or eater) It was actually really fast and easy to make. I just cooked some rice, sauteed some veg with a bunch of Indian inspired spices and in a separate pan seared seitan that was dredged in curry scented chickpea flour and mixed it all up when it was finished and added a little salt. Peter also has nice leftover to take to work tomorrow.