Dinner out and the ol' Riles 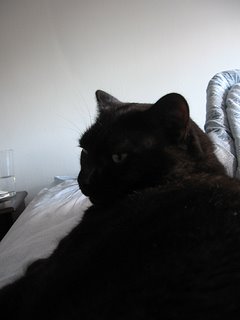 We went out to eat tonight with my sister and our friends Pete and Jenn to Veggie Heaven in Montclair. Which is the only vegetarian restaurant around these parts, there are 3 Veggie Heavens. To me it's just your basic vegan chinese restaurant. They have all the vegan versions of sesame chicken, general tso's etc...etc..tonight I had the orange chicken for the first time which was really good and I already wish I had more. Tonight I noticed a lot of older people eating there which I found a little unusual. When I say older I mean old grandparent old. Not your typical crowd of vegetarian eaters. I didn't think to bring my camera so instead of a food picture I give you a picture of our other cat Riley. This is a classic Riley pose. Slightly annoyed. In his usual spot making a mess of the bed. Peter's italian father found him by the public well as a mischievous kitten in 2001 gave him to us but continues to think that he is his cat and that his name is Felipe Fortunato. Which translates into Philip Lucky. Peter keeps saying he is going to get this photo of ol' Riles tattooed onto him. Riley is a big guy..about 30 pounds. He eats diet food which doesn't work. He plays fetch like a dog. He attacks dog's that mess with my parents dog. His favorite toy is a doll head name poo-rella. His favorite game is called "bite" where is just bites. He also make horrendous noises when he eats. He could give two shits about our girl cat Captain Clearbeard (her life story will come in another post). Peter and I love him to death.

Riley is awesome. He looks annoyed and that attitude cracks me up. I laughed out loud at this:
His favorite game is called "bite" LOL! Very sweet. He looks lovable, even if he is cranky!