I MADE SOUP!! and used my pesto from last week. 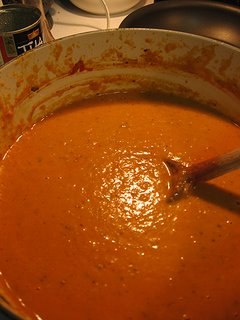 Can you believe it! I made soup last night. I declared a week or so ago on Dreena's blog that I was never in the mood for soup. I decided to do something about that and made a soup and I LIKED IT! It wasn't the soup that I had originally planned. I was planning on making a tomato butternut soup with lemongrass and coconut milk. It ended up becoming a Fire Roasted Tomato Butternut Soup w. Coconut Milk and Curry. It was along the same lines of what i originally planned, I guess. I had no intention on adding curry to the soup when I started making it. But while making the soup I started going through my spice cabinet, which is next to the stove, to clean it out and do an inventory and somehow curry and cumin ended up being thrown into the pot. It's a mystery. After everything was done cooking i stuck my immersion blender into the pot and blended the hell out of it. It was so delicious. Peter agreed that it was the best soup I've ever made. (it's one of the only soups that I've ever made) To top it all off I even wrote the recipe down, which I'm trying to get into the habit of doing. I'm organizing my kitchen better so that my table is cleaned of clutter so I can do all my recipe writing and whatnot there and not on the couch after I've eating and forgotten exactly what I've done. Anyway. The coconut milk in the soup made it very rich tasting which I liked very much. I also used Muir Glen Fire Roasted Tomatoes which are my new obsession. I froze most of the soup and will use some of it tomorrow with a panini for dinner before we head to my parents. Next week I plan on remaking this soup again to test my recipe and if it's still the same (or better) I will be posting the recipe. 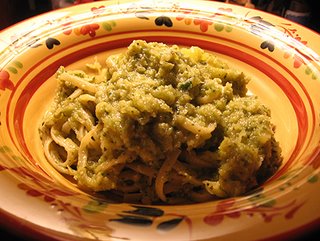 What we actually ate for dinner last night is what you see above. Spaghetti Squash + Linguini with Pesto. It was nice mixing the spaghetti squash with actual pasta. It made a nice change to pesto pasta. My only problem with the dinner was that I roasted the squash to long and it got all mushed up while i was scooping it out. I meant for it to be a bit al dente. Next time.