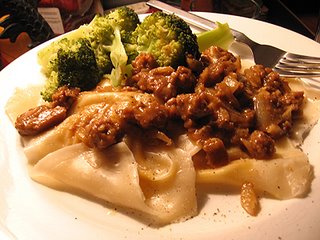 This was one of those dishes that evolved through out the evening. It all started on the train home from work today. I didn't know what to make for dinner so I tried to remember what was in our refridgerator. I remembered: Seitan (which I made monday from VwaV), wonton wrappers, kabocha squash, leeks, fennel, garlic. The picture you see above is what happened when I got home. First I roasted the kabocha squash until nice and soft. 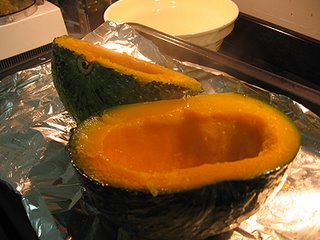 Next I sauteed leeks and garlic in a bit of olive oil until soft and translucent and put them in the food processor. When the squash was done cooking and cooled down I just scooped it into the processor with the leek mixture, salt and pepper, tamari, maple syrup and water and blended until smooth. At this point I wasn't thrilled with the mixture. Peter liked it. The taste wasn't what I was expecting. It was alittle harsh but good at the same time. I decided to leave it as it was and just to wait and see what happened in the end. I then proceeded to fill the wontons which was very quick and easy to do. I did nine at a time. (and only made 18, some ripped). I folded up the corners for some reason because I was alittle paranoid that they would open up (even though they never have for me) 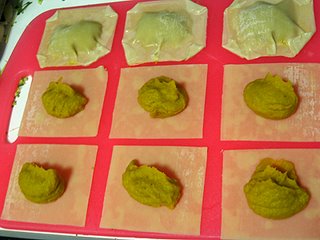 After all the "ravioli" making. I chopped a couple of cloves of garlic and about 1/2 a cup of fennel chopped up small. I sauteed 1/2 of each in the same pan that I cooked the leeks in. Then I threw in the homemade seitan(which I crumbled to look like sausage bits) and cooked it all into brown and sticky and removed it from the pan. Next I threw in the rest of the garlic and fennel cooked til soft and added veg stock which immediatly reduced and got thick and good. I threw in the seitan mixture and heated threw and just seasoned with salt and pepper. Then I cooked the ravioli, steamed some broccoli and topped it all off with the seitan sausage sauce. My first bite of this dinner produced the word "yummm" out of my mouth. Peter agreed. I am definitly going to make this again and already have a few ideas for different versions of it that I can't wait to try. Although I might not make it again after work. It wasn't that time consuming for me but it was at the same time. I would rather make it on a day where either I get home early or am off.

This didn't taste at all like I expected it to. I liked that the 'ravioli' were ultimately more like won-tons.

I don't know how you got the tastes between the filling and the seitan to match up so good. Be, you are a genius.

Hi Julie! Thanks for being my first commenter who is not my husband! (his name isn't really jim teacher)

I really like your blog as well and am jealous that i don't have a co-op by me like you do even though yours is moving i see..I hope its still nearby for you.

re: the ravioli. it was awesome and unexpected and i hope to one day have a finalized recipe that i will post on the blog. don't hold your breath though it might be awhile :)