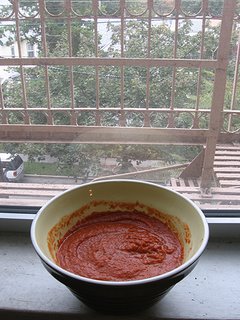 I went basil crazy the other day at whole foods and bought way to much then i needed which was a very good thing. I ended up not making what I originally intended which was seared seitan with tomato leeks and basil. What I did make was a trio of sauces for later use, which means for when I don't feel like cooking and don't want to go out to eat. I made Peter's "nonna's tomato sauce" with much success, my own basil pesto, and my own sun-dried tomato pesto. First up is the tomato sauce which i haven't eaten in sooooooooooo long. It's heavy on onion, light on the garlic with a secret pinch on paprika! And of course basil...cooked for a really really long time and then blended to goodness. The paprika really makes a difference. This is one of those sauces that you can just dip bread into it all day and eat it up. Luckily I didn't have any bread and froze 1/2 of it and put the rest in the fridge after it cooled down. 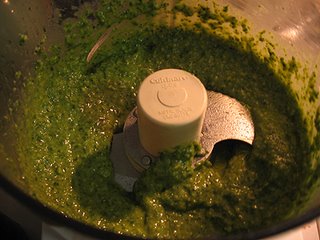 Here is a pic of my pesto. I use Miso paste instead of cheese which has fooled people in the past and I actually refer it to the cheese pesto version. I don't have an exact recipe for my pesto I just throw it all in the blender and adjust as I go. This was the first time that I threw it all together and didn't have to adjust a thing. I'm going to start keeping my notebook in the kitchen and just write down everything I do from now on right when I do it. Not after when i don't exactly remember what i did. I froze all of the pesto to use later this week as a spread for a panini and for pasta. As for the Sun Dried Tomato Pesto no picture because blogger was refusing to upload it. Its a simple Pesto to make. I dump a jar of oil marinated sundried tomatoes in a blender and add basil, raw almonds, salt and pepper and that's about it. Sometimes I add a little water to sauce it a bit a little more. Its good. After I made it Peter tells me he doesn't like it. He should have said he doesn't like it as a pasta sauce. So it will all be used on pizza's, panini's and polenta!