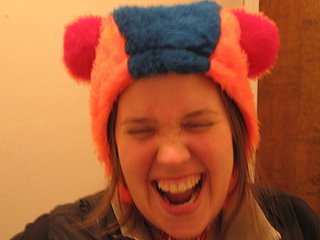 Happy Halloween. Peter and I decided to take a Halloween walk around the neighborhood and I decided to wear my bear hat that Peter bought for me at one of his Philly basement shows that he use to play. He bought me a blue and orange one because the Mets are his favorite baseball team. The first thing I said to him when he gave it to me was "you chose this one because of the mets colors right?" He couldn't believe that I knew why he chose this one. Anyway I decided to wear it for our walk around the "rich" neighborhood behind us where kids were being dropped off in cars from neighboring towns thinking they would get whole candy bars..not the little ones. Yesterday I started making Skull cookies from a non vegan recipe that i veganized. It ended with me in tears standing in the middle of our kitchen. I had a very bad day at work and the fact that I really really really messed up the chocolate part of this cookie the tears just came. There are two parts to this recipe. The white cookie which you poke holes into to make it look like a skull and the chocolate cookie which is just skull shaped and you just see it through the holes. Well the vanilla one came out ok.(so i thought) I'm making the chocolate one and I see 4 cups of flour. Now i'm thinking that can't be right the vanilla only had 1 cup. I brush off the recipe of whatever debris is on it and I see 4 cups of flour. So I make it according to the recipe. When I start mixing the dry into the wet and its not forming a dough AND 1/2 the flour mixture is still not mixed in yet I started thinking "what the fuck" I look at the recipe again and it said ONE (1) cup of flour. At that same second I heard Peter's keys in the door and the tears flowed like there was no tomorrow. I was so sad from the cookies and work. When I calmed down I figured at least I had the vanilla cookie. WELL tonight after work..I turn on the oven and take the cookies out to slice. ONLY ONE COOKIE survived the slicing!!! Which you see below and it's not a great one either. At least this time I held back tears. It might have been from the alcohol we had at work for one of the delivery person's birthday and the fact that I had a better day. 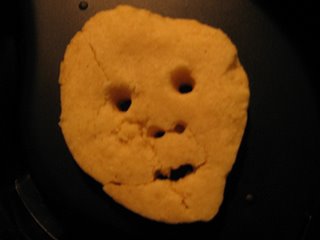 Thanks for stopping by my blog Jenna. I've enjoyed browsing around your blog. You've got some great food posted here! Yummm. Not such a good idea to blog around dinner time. That is a super cute picture of you in that crazy hat!

Hi Jenna ! I'm sorry for your day :( I too have cried because of a bad day combined with a messed up recipe LOL
It may not be a great consolation but at least you can say that you are not alone ;-)