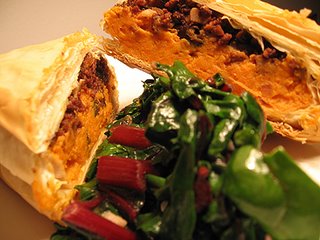 Happy Be-lated Thanksgiving!
Thanksgiving this year was at my in-laws. I decided not to bring anything of mine over to eat because (1) it would have been a big deal to reheat because his mom uses every inch of the stove and oven (understandably) (2) i woke up too late to make what I wanted. (3) i didn't feel like explaining what I would have been eating. Instead I decided to have my sister over on Friday for MY thanksgiving meal. This is one of the first real recipes I ever came up with years ago. I think even before I went to school. I still don't have a name for the recipe. I actually don't have the recipe written down. I'm still always changing it. This version that I made today was my favorite though. I took homemade seitan and minced it up. Sauteed it with shallots, garlic, thyme, sage, salt and pepper. Then deglazed it with red wine. Let it cook down again and deglazed it again with wine. It comes out so winey and so delicious I can't even explain the taste. While this is being done I have a mix of sliced mushrooms roasting in the oven until crispy and brown. And am also boiling sweet potatoes to be mashed. Once everything is finished cooking I break out the filo dough and start layering the sheets. Then plop on the mashed sweet potatoes, then the crispy mushrooms and finally the seitan and wrap it all up. I baked them in the oven for about 25 minutes or so. I served them with sauteed garlicky swiss chard. This was the first time I used sweet potatoes. I usually use red skin potatoes. I will never use anything other then sweet potatoes again. They went so well with the winey seitan and mushrooms. I also crisped the mushroom more then I usually do and it gave the whole dish a smokey taste to it. I can't wait to eat the leftovers tomorrow!
One other thing. This was so easy to make considering all the different things that needed to be done for it. It took less than 1 hour to cook everything and assemble. It also could have been done sooner but I took little breaks to do whatever. 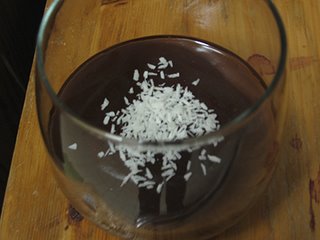 Dessert! The quickest, easiest dessert ever. This is the Coconut Chocolate Pudding from VwaV. It was so good. Nicole even liked it even though it was all natural. She prefers processed unnatural food. She also hates to cook. I don't know where she came from. My only problem with the recipe was the amount that it made. It should have served 4. There was no way in hell this would have served 4 people. Thankfully there was only 3 of us. I would definitely double the recipe next time. Or at least 1 1/2 times. I wish I had more right now!

Wow... The nameless recipe blows me away. I still haven't experimented with filo... I guess I've been scared of it in the past and now I'm to stay away from it from the detox. I think it's awesome you make your own seitan; I used to buy mine but now my WFS stopped carrying it. So looks like I'll have to start making my own soon too. I've got tons of recipes for it... just seems labor intensive. Dear lord you'd never think I'm this lazy looking at my blog eh? But I am... I digress!

Mmmm pudding. So did you just end up not eating anything at the in-laws? Hope you had a good thanksgiving! Love the nameless recipe! :)

oh wow! that is such a great idea.
i have some leftover seitan in my fridge. btw ben, if you read this - it is not that hard to make, a couple cups of flour and some weater make lots...
maybe i'll just make some pockets, too. i like that more than just throwing everything in the microwave. :)
hope i'll see you next week! will you work mon-thu again? or all week? i'll stop by.

ben~seitan is very easy to make if you use wheat gluten flour. if you use regular wheat flour it will take forever because you have to wash all the bran out and stuff. try it one day!

wiebke~i work every day mon-thur 8am-3 or 4. mondays are never a good day to stop(i have so much to do) but any other day is usually fine.

Oh what a yummy blend of flavors! I'm all about pumpkin and sweet potatoes right now.

And pudding! I haven't had that in forever. I would make mine chocolate too!!

Jenna, it sounds and looks totally delicious ! I'm sure I would just love it :)))

Jenna, great food! I'm adding a link to your blog.

What is that wrapped in? I am captivated by this, Jenna.