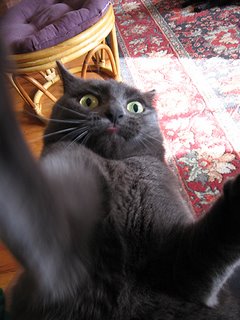 Riley had his "about him" post a few weeks ago so it's time for Captain Clearbeards "about me" post. Here she is in all her glory. First I'll explain the name Captain Clearbeard. She drinks water like it's the last time she'll ever see it. She's obsessed. When she drinks water she sticks her chin and chest into the water creating a glorious clearbeard. Recently she has been shaking it off like she's a dog. But some dropplets still remain. It's incredible. I've yet to capture a picture of the actual clearbeard. We just call her CB for short. As you can see she is a vicious beast. A neighbor of ours in the building had her first but we found her in the hallway one morning and she has lived with us since. Her likes are: killing crickets, drinking gallons of water, kneeding her silver paws on my belly, biting, attacking, attacking from behind, revenge attacks, hanging out in the kitchen when I wash dishes(for the water), bean liquid (she's weird), birds on the fire escape, the spider in the kitchen. Her dislikes are: being attacked from behind, being bite, having riley walk towards her (he's 25 pounds, she's 1/2 that weight), wolf noises peter likes to make at her, being held when she doesn't request it, being left alone for to long. Peter and I agree that what she hates most about herself is her super super soft fur. I could pet her super super soft fur all day. But then she would bite me all day. We love her to death. I like to sing songs about her when i'm cooking. She secretly likes all the attention we give her though she pretends to be a beast. 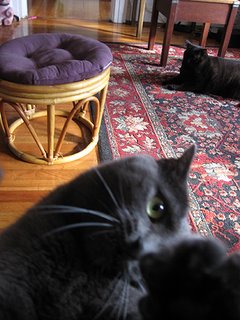 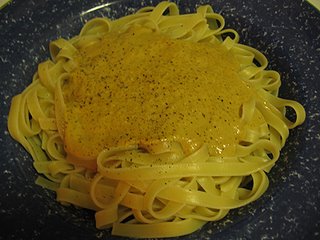 Last night I made Fetuccini Alfreda from VwaV. I LOVE this sauce. It's probably one of my favorite recipes from the book. I've made it so many times. With all the cooking I did over Sunday and Monday I needed something that was going to be quick and easy and didn't require alot of chopping. (I broke my right (dominate) hand LAST Nov. 28! and it's still bothering me at times. Making pizza dough really bothered it the other day but at least it was good exercise for my hand.) I love that this recipe makes enough so we can have it for pasta one night and something else another. Usually pasta again. This time I'm going to do something different with the leftover sauce. I'm not sure what though.

You should send that first photo to the makers of Bad Cats. Classic!

LOL! I am loving that shot of CB!!! Those eyes are awesome. So cute. The other kitty shot of both of them is great too. You must have quite a scrapbook!!

Vwav has this recipe in it?? Where have I been?! I will be making it soon! Britty will love it. Alfredo on pasta used to be her pre*vegan favorite dish!!

Wow, a year later and you can still feel the pain in your hand? :( Yes, think of it as physical therapy to make the dough!!

CB reminds him of my childhood nemesis: my black cat who would hide under my bed and attack my legs every time I went to the bathroom at 2am. LOL

I LOVE your area rug!

Under CB's 'likes' you forgot

urban vegan. I might have to start my own Bad Cats file.

gaia. I love my area rug also. so does CB. She has ruined it with her claws. She is so bad. My friend had a cat that would attack your legs everytime you walked into their living room. We would leap through the doorway trying not to get attacked.

candi. A year later and it still hurts. The night I wrote this post I hit Peter's elbow or wrist right on the spot of my hand that broke. Needless to say it wasn't fun. The next day I work I dropped a container of milk because my fingers just stopped working. But today all seems well. :)

jim teacher. aka. Peter. How could I have forgotten Cb's favorite drink JAY ROBB!

CUTE!! In addition to bad cats, you can send it to cuteoverload.com!

Oh, I'm glad to have a kindred- soy- frothy - drink lover! Aren't they the best?

:( That's sad about your hand. I broke a toe and felt it for quite awhile. It's fine now, but it's easier to heal a toe than your dominant hand!

I stopped by your blog again to see CB's little tongue sticking out. Lol!! I love that shot.

I was just thinking--did you ever check to make sure your kitty is not diabetic? Drinking lots of water is a symptom, so you might want to get the kitty checked (Don't mean to scare you. It's probably nothing, but even if he is diabetic, it's easy to control.)