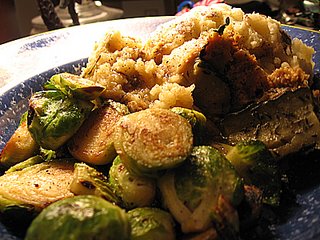 This was one of those weeks where I wasn't able to cook at all:
Monday: bad day at work=out to eat
Tuesday: friends b-day=out to eat
Wednesday: dmv=out to eat
Thursday: don't remember but. out to eat
Friday: nothing but peters brother wanted to go out to eat
I am sick of eating out. I make better food at home. But too much was happening that if I cooked dinner any of those days we would have eaten at 9pm or later. Anyway. I was watching Top Chef and they had to make a favorite meal from there childhood and update it. Which got me to thinking about Shepherds Pie. I loved it as a child. I haven't cooked from The Voluptuous Vegan which is by one of my old cooking school teachers, Myra Kornfeld, in a long time and remembered that there was a recipe in it for the dish so I went for it. There are so many steps to this recipe that you can only make it on a day off. At one point I had 4 things cooking at once for this. Tempeh was steaming, Zucchini was baking, Potatoes were boiling and Onions were sweating. Plus when all the was happening I was chopping spinach and garlic and other stuff. In the end I think it was too much work for the result. It was very good for what it was. But not what I was looking for. I remember shepherd pie as a bubbling mess of deliciousness. This version had no sauce so I ended up making a quick brown sauce for it just to give it something extra. I'm already working on a version in my head of what I think it should be like. Which of course involves another addiction of mine: Seitan. 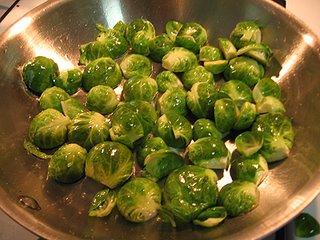 This is the best part of the meal I had. Brussel Sprouts!!! Oh how i love me sprouts!! Lucky for me Peter hates brussel sprouts so I get to eat them all myself except when my sister is around. My favorite way of cooking them is slicing them in 1/2 and putting them sliced side down in a bit of oil and caramelized them on that side. Cover them for a bit to "steam" them up and then season with salt and pepper and eat eat eat!! 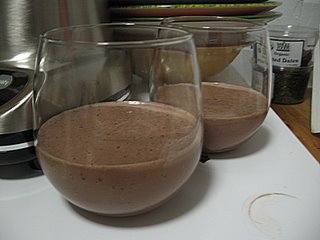 Last night we even had dessert. Peanut Butter Zig Zag Shake's!! Simply blend the ice cream with soy milk and drink! Peter wished they were bigger but after a heavy meal like the Shepherds Pie I think a huge milkshake would kill us. Besides we were late for a party at the Ace Bar in NYC which we never made it too because we drove around the east village for OVER an hour looking for parking. We never made it to the party. Sorry Andrea! I blame the CMJ Music Festival for the lack of parking.

Hi! Thanks for your comment on my blog, because it gave me a chance to find yours, and I'm loving it. I used to live in NYC, so this blog is filling a nostalgic void!
Those brussels sprouts look fantastic- I'm glad they went to good use. And I've never had the real shepard's pie, but the version you describe sounds pretty tasty.
I look forward to visiting your blog and learning new things.

Hi Jenna! What a great idea to make Shepherd's Pie! I loved it too, and want to veganize it. Too bad yours took so long. Maybe that made up for not being in the kitchen all week long though! :)

The brussel sprouts look so good!!

"Lucky for me Peter hates brussel sprouts"
Lucky you indeed ! Here we fight for them LOL

Hey! My first time to your blog. You worked way too hard on your Shepard's Pie! I used to make it all the time pre-vegan, and then to veganize it all I did was put chopped veggies in the bottom of a casserole, pour a silken tofu sauce over those, and top with mashed potatoes and bake. That's not fancy but it is a casserole after all!

I haven't seen romanesco here yet but I can't wait! I understand it has an extremely short season so you have to get it while you can.

Oh man. I've only had brussel sprouts twice in my life. Once in a five star restaurant in London England... and I somehow remember liking them (or at least pretending to cause it was a 5 star restaurant in London LOL)... and once last week... at which point I remembered to add it to my list of not so liked veggies. Not too bad... only two veggies on that list. "Broccoli Rabe" is #1 on that list. That stuff is gross. I'll stick to regular broccoli.

In other news... Mmmmm Milkshakes! :)