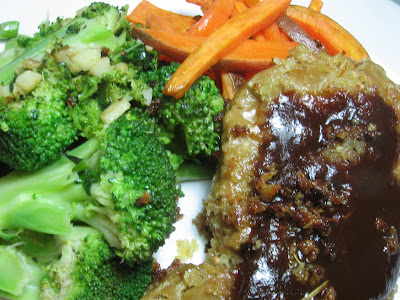 Seriously. I'm having major problems coming up with a mustard crusted seitan recipe. The first time I tried to make it I had the right idea but just totally went about it wrong just to make it quick. Last night I totally had the wrong idea about how it should be made and continued to go about it the wrong way even though I knew it was wrong. I've never had trouble creating a "crusted" item before. Why so many problems with mustard of all things. The first time I at least actually tasted mustard in the final dish. This time I didn't and I used way more mustard than the first time. I ended up blobbing some BBQ sauce on the seitan cutlets at the end just to give it more flavor. One thing that did work with the weird "crust" was the BBQ sauce. Something about the mustard, rosemary and sauce all worked together. It wasn't what I wanted but it turned out turned happy at the end.

Also what has been up with my pictures recently? First the ugly burrito now this busted pic of some weird seitan. I need to start taking my time with things again and not be in a hurry which is hard with a 13 month old.

Your picture looks good to me! Sorry about your mustard problems, but at least everything turned out happy in the end! :)

I agree, the seitan looks pretty good to me!

Your photos are amazing, no worries!! And OH MY, I love sweet potatoes :0)

it looks good either way! yellow rose recipes has a mustard crusted seitan, doesn't it?

It looks good to me!

The mustard crusted seitan in YRR is amazing. I'll bet you could adapt to add in maple. Yours looks really tasty. I refuse to believe it's a curse.