Stupid Olympics and business trips and mini vacations and.... 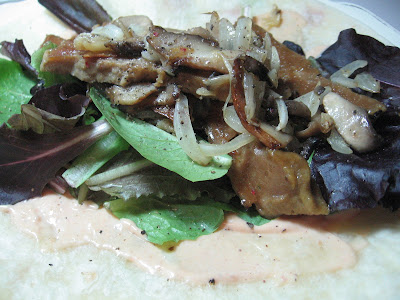 So I've been M.I.A. for a bit. Peters went away for business so I went to my parents with Reno for a few days so I wasn't spending my b-day alone (yikes! I'm 32!!) By the time we returned the Olympics started and that has been taking up most of my pm time especially since it's Swimming time and as a ex-competitive swimmer I can't get enough of watching other people swim. I just want to dive into the pool with them.

I've still been cooking though. Most of it just easy favorites but some of it new like the wrap above. I can't tell you how good the seitan was with sauteed portobello's and onions and lots of garlic. Holy Goodness! I wish I was eating it right this very second. I'm in fact eating a Chocolate Chip Cookie Pie!!! More on that in a later post after I serve it to people. 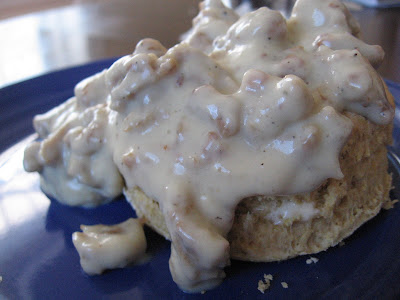 I'm not southern at all. I have no southern roots, nothing. But I love me some biscuits and gravy. I love them so. Both recipes are from the book Yellow Rose Recipes the biscuits are on page 17 Buttermilk Biscuits and the gravy is on page 83 Almond Milk Gravy. I didn't have any almond milk so I just used soy instead. I usually don't use store bought meaty things but purchased some Gimme Lean Sausage for the gravy. It's not bad stuff. I don't think I could eat it plain without a sauce but it's nice to know it's available if I need it in a pinch.

You've been quite busy!! But at least you've been busy COOKING :0) Good ol' Southern comfort!!

So, it's all over my facebook page, but I made vegan Root Beer Float cupcakes today...

ooh, those biscuits look SO comforting... I really want one right now!

That wrap looks delicious. I always forget about chipotles. I bet they're really incredible in a mayo.

Happy Birthday! I love the swimming too - go Dana & Michael!

That wrap sounds SO good!