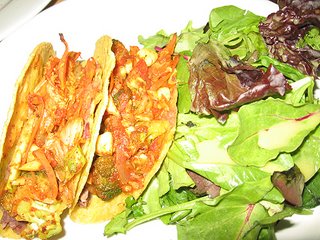 These are the best vegan tacos you will ever feast your eyes on. At least that's what I think. I realized I haven't made tacos in ages the other night (mainly because Peter won't eat anything called tacos) and set out to create a veggie and bean one with all the left over produce I had used to make a stirfry. The base is super simple...kidney beans mashed with a little bit of crushed tomatoes and a splash or two of tamari. Real simple. For the topping I thinly sliced: napa cabbage, carrots, broccoli, garlic, onions. Stir fried it all up with chile powder, cumin, red pepper flakes, chopped raw almonds and crushed tomatoes and then just filled the tacos with the beans and veg and stuck em in the over for a few minutes to crisp them up. If I had an avocado on hand I would have sliced it up to stick on top of the taco. They turned out so much better then I thought they would..what really put them over the top were the almonds I decided to add at that last minute. They gave a surprise almond taste and crunch every few bits. Delicious. I wouldn't change a single thing about this recipe. 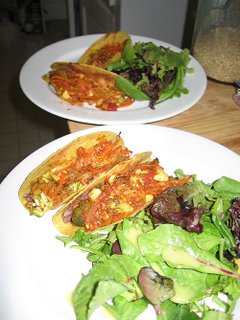 They were awesome, be.

I am trying to think of some of your other recent awesome experiment dishes that I want to be part of our staple rotation, but I can't remember them.