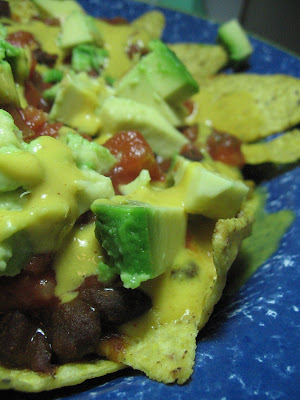 I've been dreaming of this day for a long time now. A day where Peter would be going out with some friends for dinner and I'd be able to eat a non-Peter friendly dinner. This finally happened this week and I was finally able to make myself some vegan nachos!! Peter will never eat this. If he was home and I made this he would probably vomit because the though of it would gross him out so much. It was bad enough when he did come home that my nearly empty bowl was still sitting next to me in the living room. It was worse that when I went into the kitchen to clean up that I left the nearly empty nacho bowl in the living room and then had the nerve to ask him to bring it too me. It's true love when your nacho hating partner will bring something like that into the kitchen for you. 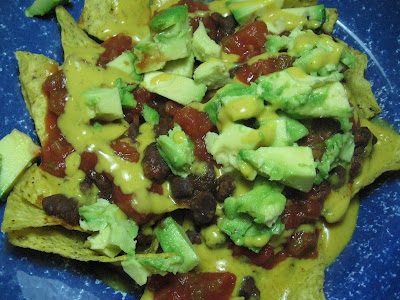 Another view of the NACHOS!!!

Dare I say that these were "semi homemade"? They were. At least I didn't have a whole table scape planned or set up for the occasion. That's only some that Sandra Dee, Sandy Lee, Cindy Nee whatever her name is would do.

What is all was.

Oven was at say 400˚. On a sheet pan with parchment paper I put a very generous handfull, or 2, of tortilla chips plus 1/2 a can of Amy's Black Bean Chili on top (that's the semi-homemade part). While they were heating up in the oven I made Joanna's Nacho Sauce from Yellow Rose Recipes cookbook. When everything was done I transfered the chips w. chili into a bowl and dumped some nacho sauce on top followed by some salsa (not homemade) more nacho sauce and then some diced avocado.

Holy lord were theses good!! What made them even better was sitting in front of the TV with them and watching The Science of Sleep for the very first time. It's now one of my all time favorite movies.

How funny was the makeover episode of ANTM?? The drama is just too much, haha.

I've never heard of HATING nachos! They look delicious and I'm glad you had a chance to enjoy them.

Ah! The Science of Sleep is my favorite movie! I bet it's even better to watch with nachos! Gotta try that nacho sauce!

oh man, i'd have nachos 3 nights a week if my significant other wouldn't get sick of me making them.

Hey. We made this great vegan nacho with no-cheese queso. It was so zesty and yummy messy. Check it out if you have a chance http://nachosny.com/2008/12/27/making-vegan-nachos/.