The biggest buns around! 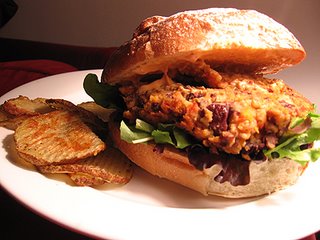 Sunday night I wanted a veggie burger. More specifically a red bean butternut veggie burger with chipotle aioli. So I set out to create my own. I sauteed garlic, shallots and red pepper's in a bit of olive oil and then added small diced butternut squash. This was my first mistake. I should have just roasted the squash first or sauteed it by itself or before all the other veg. But my brain has been in a bit of a fog recently and it all worked out in the end. While this was all cooking I cooked a big pot of millet in a veg broth/water combo to use as a binder. When it was all finished I mashed it all together with a can of kidney beans and cooked em up. First started in an oiled skillet and finished in the oven. I served them on the biggest rolls i've seen in a long time. They were Tribeca Rolls from Whole Foods. I loaded the rolls with alot of homemade chipotle aioli and a salad's worth of mixed greens on each. The aioli was HOT! I first put one chipotle in and wasn't happy with it so I added another which I was happy with but my mouth was on fire. Next time I'll use 1 1/2 chipotle's.

In all the burger was delicious but it smushed all over the place. I need to mess with the recipe a bit to get it to smush less although I don't mind it too much. Peter wanted them alittle bit more well done. Screw him.

I also attempted to make waffle fries. They wouldn't "waffle" some would some woudn't. I havn't figured out why yet because i've made them before. I'll blame the foggy brain. 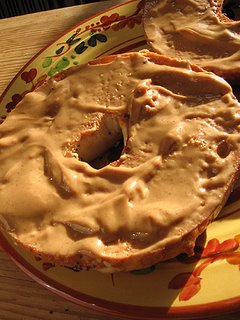 There is nothing better than waking up on Sunday morning. Getting dressed. Leaving the apartment to find that my NY Times hasn't been stolen. Getting a latte and an everything bagel. Coming home. Toasting the everything bagel. Spreading natural peanut butter on the still hot bagel so it melts and is delicious and eat it up. I wish I had one right now. But it's 9:30 pm and it would give me crazy dreams if I ate this late at night.

Ha ha ha. Your title today made me giggle. =)

Nice buns. And nice bagel. The idea of putting PB on a begal has piqued my interest. Yum.

mmmmmmmmmmh. i miss those sundays when i can just walk into the kitchen at whatever time i like and make some coffee, toast a bagel,...
time to get out of this apartment! it sucks when the roommate sleeps in the kitchen/livingroom.
only 20 days of school left.

My, what big buns you have!

i've never thought of pb on a bagel but wow! that's a really good idea. your burger looks great - even if it smooshed all over the place.

mmmmm, I haven't had breakfast yet so that bagel is looking delicious !

your sandwich looks really good. sometimes i like it when the burger is too squishy b/c the extra parts fall on your plate and you can mix your veggies up with it.
i like your blog, i will visit it at work so i can look at your pretty pictures of your pretty food while i daydream about what to make for dinner.
yummy.

thanks everyone for all your comments. I can't believe there are people in this world who have never experienced a bagel with peanut butter.! It's the best thing on earth..especially an everything bagel. I might actually leave my apartment tomorrow on my day off to buy one.