Where the hell have I been?

Whoa! I've been missing for awhile! I didn't realize it was as long as it was. I put the blame on the holidays. I put the blame on sickness. I put the blame on migraines. I put the blame on lazyness. I also blame the Food Health Class I'm taking for my job. Bacteria, Microbes and Plumbing can really make you sick to your stomach. Some or all of those might be true, we will never know. I actually havn't been feeling that well and lost interest in eating food. I also didn't want to eat food that I love and then get sick and then never want to eat it again. Is that weird? Maybe but I think it worked in my favor. Tonight I made the best curry i've made in ages. 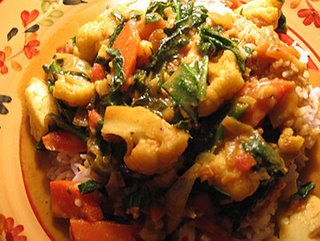 I used cauliflower and spinach, LOTS and LOTS of spinach. It made me very happy to be cooking again and eating again. I usually use my food processer to chop up all the onions and tomatoes and such for the sauce. But I mistakenly put the parts in the dishwasher and turned it on before I realized I needed the blade and everything else. So I made it all by hand. Which I think is the reason it came out so good. I kept telling Peter it was made with LOVE. 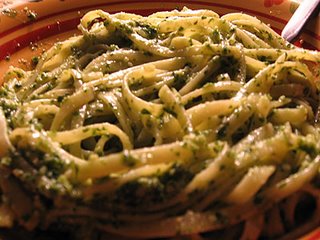 One day last week I made a Basil-miso pesto. I find it strange that it's easier to find basil in the winter then the summer when it's in season. I couldn't find it anywhere this summer. I'm finding it now though so pesto will be made whenever possible. I like it way to much. 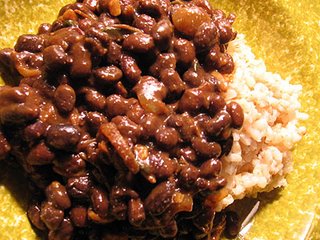 I also made Rice and Beans. A special treat for Peter. I use to make this one or two times a week and then gave up on it to try out lots of new things. He was missing it though and so was I.

That's really everything for now. I'm happy to be back.

I'm happy you're back too! I'm glad that you are back to enjoying food again. Seriously, sometimes too much info at once can ruin your appetite!!

Your curry looks perfect with lots of spinach! Yes, made with love! :) :)

Pesto in the winter? Lucky you!! I'm resorting to jarred pesto, and it's terrible. (Most have cheese in them, so I can't eat them) I miss my home made pesto! I love it too much too! And you added miso? YUM!!

The beans look great. I would eat that tonight if I had any!

Glad you're back to blogging. :)

I'm glad you're back! I've been exploring your blog in your absence...

I know what you mean about not wanting to spoil your favorites by eating them when you're ill. I follow the same practice, and eat bland, bland, bland when I'm sick. So glad you're feeling better! :)

Marty likes rice and beans but I never make it. I suppose I should probably give it a try. Your dish looks so delicious!

Candi~welcome back to the east coast! pesto in the winter? i say pesto all year round. also I use miso in place of cheese. you should really try it one day!

laura~thanks for exploring. i'm obsessed with indian food. just be careful using tumeric it will turn everything yellow that you don't want to be yellow! my wooden spoon is now yellow, one of my dish towels is yellow and my hand was yellow for awhile!

Vivacious~rice and beans are so easy, delicious and CHEAP to make. use lots of cumin.

I am happy to be eating something other than sugar again, too.

You're back ! So sorry you weren't feeling well :(

The curry looks delicous !
And I want to eat the pesto pasta too !

I am glad you are feeling better, and up for making and eating this gorgeous food. I would take any of these things for dinner right now- acually, I've been having too much rice and beans, so pasta and curry, please!

Can't wait to see your creations to come.

So glad you're back, Jenna! I've been sick too so I totally sympathize with you.

I love your curry dish, the miso pasta, and even the peasant's meal!

I hate winter. How can you stand it up there!!!

atxvegn~ I love the winter! Saturday it was so warm out. and today (wed) it actually started to snow. I ran outside the back door of the kitchen I work at and started running around in it. Too bad it only lasted 5 minutes. Cuco and Jorge the cooks thought I was nuts.

bazu~rice and beans can get to be too much sometimes...I loved your NYC pics on your page by the way.

gaia~i'm glad to be back too. I missed everyone elses blogs and am catching up as fast as i can.

urban~sugar really messes you up..I actually had to throw away a bunch of the cookies I just couldn't take it anymore.

curry.. YUM!!!
pesto pasta - me oh my that how I would love to have that! my kids aren't big pesto fans so, I just don't make it often.. Maybe it is time to try again..
heres to hoping you are feeling better in a jiffy! Happy New Year..
Julee

Still dreaming about ice cream and wonderful creations? Would love to read about it. Hope all is well.